Check out my undergraduate portfolio:

View this document on Scribd

You can view more pictures of things I’ve designed on Flickr.

I have an insatiable appreciation for food. I once studied in Bologna, Italy for a week at an Italian culinary academy. I have started a food blog documenting dishes I’ve made. Additionally, I shadowed an Italian chef at a local restaurant and learned many new skills (like making tortellini or bread) under his guidance the summer of 2013. I also designed and printed my own vegan cookbook. In the summer of 2015 I fulfilled a 5 year long dream (for which I worked every summer and funded myself with the help of an Indiegogo campaign!) and backpacked on my own around Italy learning to cook in 6 different regions for 3 months. I am currently working on a series of blog posts and (eventually) another digital cookbook to complement the photo-a-day documentary I did supplemented with the handwritten recipes I have written down.

For the first 4 weeks of the semester of my master’s program, we had to conduct individual interviews to gauge user interest and observational research to identify latent pain points of the household broom. All of this led to each student creating their own prototype of what a “new and improved” broom could be like– taking into account paint points and aesthetic preferences of our intended audience (I picked “the bachelor” and discovered through a series of image boards that a wooden feel with metal accents was most desired). The biggest pain point I observed was that every male had to awkwardly hold a tall broom (if not switch to a small hand broom) when it came time to collect the dust into a dust pan. I created a wooden broom with a telescoping arm that snapped into place to convert so that one could grip it as they would a smaller hand broom. 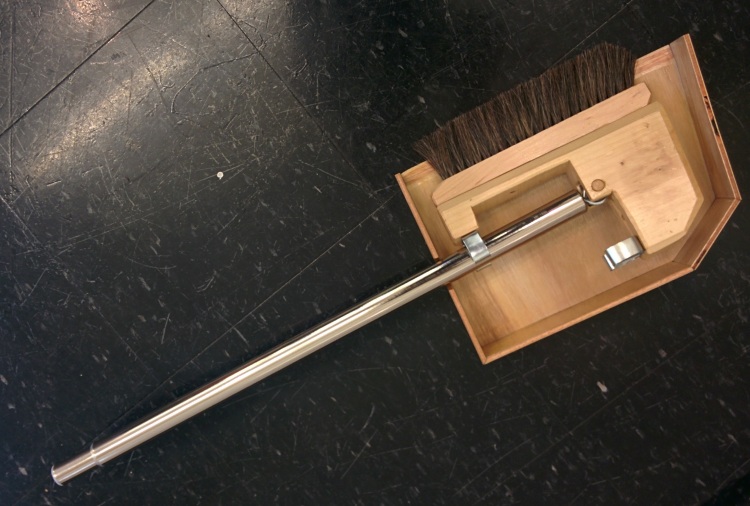 Our capstone project for the first semester however, was to design, manufacture, and sell 50+ products. Our team chose to design a walnut cheeseboard with a slate accent piece. There is a slot to hold a cheese knife and the slate is removable so that it could be placed in the fridge prior to use to keep the cheese cool, should the user so desire. I created the CAD, BOM, plan for manufacturing, and marketing campaign. We were the most successful pre-sale team (of 6 in the class) as we sold out before the sales gala (we had “scrap” test pieces that we ended up selling at the event, so our wastes were incredibly low). 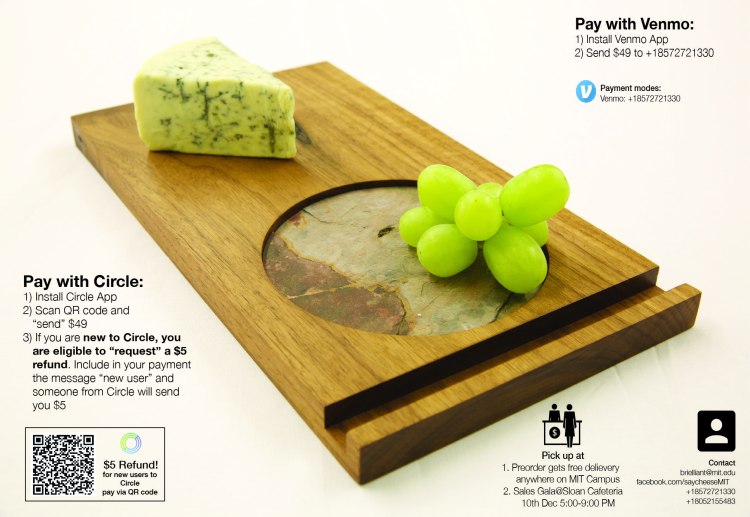 Our spring semester capstone project was to create a device that would improve one’s emotional experience at home through the use of smart devices. We partnered with Sonos Speakers to create our product: Dom. Dom radiates a visual queue to suggest your mood based pulled data from your wearables throughout the day. Upon getting home and being pressed, it then plays a pre-selected playlist that has been associated with whatever state you’re in. You can tell it if it is correct or not, and it will learn how to best estimate your emotional state over time. I created the CAD for the mold parts we needed to cast our polyurethane skin we made to help diffuse the light and give the user a nice tactile feedback. I also helped in conducting bench-marking research, user-interviews, early-stage blue foam models/form exploration, and other standard processes for product development. I led the team in day-to-day and weekly scheduling, gave updates to our professor, and helped give the final presentation to our partners and guests who came to the IDM event. 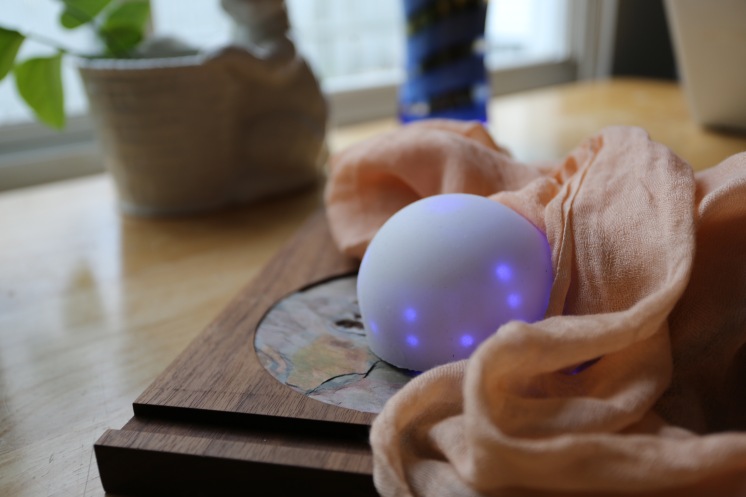 The final product glowing a blue color to display that it thinks you are sad (on Semester 1’s final product!)

2.12: My team designed and laser-cut a robot to compete in the “floor” gymnastics portion of the end-of-term competition. Here’s a video of our final routine:

2.009: My team filed a provisional patent for our product, EquiTemp, and is in the process of bringing the product to market. For a summary of the class: http://meche.mit.edu/news-media/video/0/719 2.744: This graduate product design class honed my “artistic” skills such as being able to convey my thoughts via visual media as well as other skills relevant to user-centric design. The theme was to create a game appropriate for all ages that could be easily scaled in difficulty and reset without human interaction. Check out my classmate solving our final product:

2.007: My first exposure to robotics was as a student of the class Design and Manufacturing I. To make it classy, I of course made my robot pink and gold.

Spring 2014 I took a class that worked with wood nearly exclusively. I learned about various aspects of wood such as types of cuts, joints, grains, as well as the different wood-working machines (table saw, planers, etc.). My final product was a jewelry box of bent wood with walnut drawers that swiveled out!

For my brother’s wedding present, I created a storable furniture piece. He and his wife like sitting on pillows in their NYC studio, so I thought a sitting mat for them to use and then roll up to conveniently store would be welcomed. From this, I have thought of several different “storable furniture” ideas and look forward to the idea of creating a company from it in the future.

As an undergrad, I became an activist for sexual assault awareness here at MIT. At the end of the spring semester of 2013, a friend and I co-produced a documentary, project dx/dt, which documented how sexual assault has changed the lives of MIT students. (Abridged version and blog post.)

Most recently, I helped produce another short video of the opinions of the Title IX Student Working Group at MIT expressing the necessity for everyone in the community to step up to end sexual assault on our campus. This was the adaptation of the White House initiative “It’s On Us.”

During my undergrad, after the release of the documentary, project dx/dt, I was asked to present before the entire freshmen class of MIT 2017 at orientation. I then worked with the Senior Associate Dean and Director of Undergraduate Advising and Academic Programming in creating a forum in which students will engage in a discussion about a plethora of questions such as, “What is sexual assault?” “What to do when someone comes forward about being violated?” etc. I spoke at a Housemasters dinner where I was then invited to several undergraduate dorms to hold the forum I created.

From October 2014 through June 2015 I worked full-time for the Title IX Office however most of my efforts are focused on sexual assault awareness and prevention policy and programs for MIT. Additionally, I was asked to co-chair the “Sexual Assault Awareness Month” (April) programs on campus. I also served on a sexual assault prevention and education task force for the Chancellor.